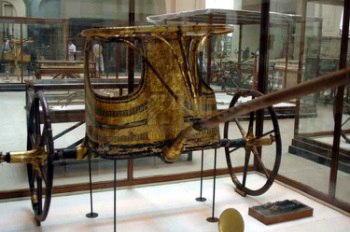 (Chariot from the Tomb of Tutankhamun, Cairo Museum)
One of the evidences of chariot are the actual object which was found in the tombs. During the New Kingdom, deceased was buried often with his personal goods for the use in his afterlife.

These evidences are very important for the experts to observe and understand how the chariots were structured. Understanding of structure can lead to experimental archaeology of building a replica for testing its capability.
(Click here for more details) 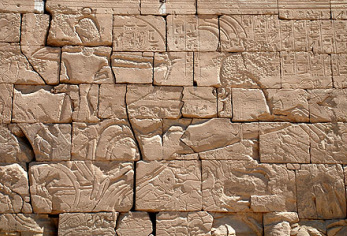 (Battle of Kadesh relief at Ramesseum, Thebes)
Another evidences of chariot comes from scene which are painted or engraved on temple and tomb wall. In fact, the image of Pharaoh riding on the chariot and shooting his enemy is a well known image during the New Kingdom that is often recognized as a propaganda.

Best known example of chariot scene is the Battle of Kadesh under the reign of Ramesses II. This relief that shows Ramesses II on his chariot shooting the Hittites is found in most of his monument such as Temple in Abydos, Luxor Temple, Karnak Temple, Abu Simbel, and Ramesseum.

These evidences can be used to understand many things other than its use as a propaganda such as development in design.
(Click here for more details) 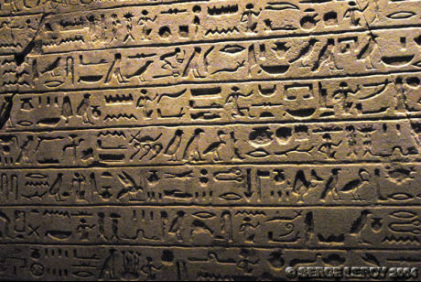 Textual evidences are another set of evidence which provides information relating to chariot. These can be in form of papyrus, inscription on temple wall, inscription on stela and so on.

In the topic of chariots, texts are more of a historical document and it is difficult to be used to understand the technological aspect of it. For example, one of the earliest use of chariot in Ancient Egyptian warfare can be read from autobiography of Ahmose, Son of Abana.

However, there are some description to understand chariot technology although it could be propaganda, Annals of Tuthmose III mentions that the Tuthmose III's Chariot was decorated with electrum.
(Click here for more details)
Next
Back
Home
Powered by